This article is specifically directed toward those of us who practice – and especially teach – yoga asana. So much is written about how to “open the hips”. Is that really what we want to be doing? The balance of stability and mobility is different for every person, and since “support” needs to precede any kind of action or opening, perhaps we need to be looking at integrity in the hip joints. Using a paradigm that is based not on increasing flexibility, but instead on increasing ease and comfort, needs to be looked at more carefully by all of us in the yoga community. What is flexibility anyway? What is tightness, for that matter?

Anatomy of the Hip Joints

The neighboring joints work in concert with the hip joints. When all the joints are in balance with one another, forces will flow through them in such a way that each, with its individual qualities, will play its part in distributing force appropriately to its nearest neighbor and through the body as a whole. Forces that are restricted in one joint will be transferred to the next joint – often applying undue stress. The more peripheral joints of the feet, ankles, forelegs, and knees are smaller than the relatively large hip and sacroiliac joints. The peripheral joints provide a good amount of articulation. When they are not functioning well, they will put strain into the hips and sacroiliacs. The hip joints are highly mobile, but are importantly designed for greater stability than the more peripheral joints in the legs and feet. Stability in the sacroiliac joints is equally important, and the hip joint is far more mobile than the sacroiliac. Restriction in the hip will cause the sacroiliac to take stress.

The direction movements of the hip joints are usually very specifically delineated. They are flexion, extension, adduction, abduction, internal rotation, and external rotation. But rarely, in life are any of those individual movements made without at least traces of some of the others. The hip is a ball and socket joint with the possibility of a great range of motion. Movement doesn’t actually ascribe to the linear think of our anatomical analysis. Really, the joint moves pretty much any direction it wants, within its specific range of motion, which is highly variable from individual to individual. Most healthy motion in the joint needs to involve both bones – the ball and the socket – so that they are working in harmony to create the desired movement expression. As with any other movement, support needs to precede action at the joint. Support is a process that involves both bones working together to give the joint the stability that it needs to move with health.

Healthy Movement in the Hip Joints—at Level of Bone

Examples of Pelvic Half and Femur Moving in Supportive Ways to Keep Undue Pressure out of the Hip joints:

What Goes Wrong in the Hips 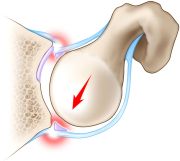 Most of the common problems listed above result primarily from improper weight bearing and transference of forces through and around the joints…and the into the whole body. Taking all of the weight and force of lower body movement in the joints is always going to be a problem.

It cannot be overemphasized that joint safety and comfort is the result of healthy prana flow. This is especially evident in the major joints, like shoulders, hips, SI, and spine. The main pathways of prana in the body are through the fascial system. Fascia is distributing weight and force through its entire thick three-dimensional web all the time. That includes the hip region and its joints, the entire leg and torso…everything, all the way through the whole body.  Fascia is not discrete to the joint. In fact, in health, it supports and integrates joint structure and function by distributing forces through and away from them. Turning our awareness to the fascial web will help us to relieve a great deal of the pressure we have been needlessly applying to our hip structures in our yoga practice.

The term anatomy may not any longer be the most useful way to look at the structural aspect of the human body. Anatomy derives from the Greek: “ana”–up and “tomia”–cutting. In fact, anatomy in the western world has been primarily based on cutting things up. In the Newtonian mechanistic age, this made good sense. Our cutting up of the human body paved the way for a lot of insight into structure. However, it may be time to go deeper.

It may be time to look at function and structure as a single event, rather than two separate entities. Function isn’t exactly a “thing”. It is more like the intelligence of the structure. Through yoga philosophy – and our direct experience –  we find awareness and intelligence as the underlying basis of both function and structure. We find we are observing – and embodying – a highly intelligent and creative event: our own bodies. Adding intelligence and unification to the list of qualities that we find in our physical bodies opens the door to an altered perception of movement and support. The new research into the integrating role of fascia in the body is a window into a direct experience of the supportive weave of intelligence, function, and structure that integrates body-mind-spirit.

For the purposes of this workshop let’s consider how much importance we should place on one aspect of our hip structures—our old favorites: bones and muscles. The thought that bones are levers that flex and extend on one another to move us through space is not as accurate as it may seem. There is important ongoing study now into the nature of the fascial weave of human structure and how bones behave more like spacers and struts within the fascial weave than they do as levers for transmitting force. Read “Embodied Tensegrity, Fascia, and Yoga” on the Embodyoga® Blog.

Just the term “lever” is disruptive to natural human movement. What we believe has a lot to do with how we move. Believing that our bones and muscles create a lever system that moves us through space, profoundly limits how we actually move, and how we experience ourselves in movement. A lever is a simple machine. It’s “a rigid bar resting on a pivot point (a fulcrum), used to help move a heavy or firmly fixed load with one end when pressure is applied to the other”.

Movement in the human body is not based on levers. It is based on a much more inclusive and all-encompassing weave of structure and support. The weave is primarily composed of connective tissue, and for our purposes in movement, is mainly fascia. Fascia is a multi-directional weave of varying densities of connective tissues that is continuous throughout the whole body. It is our primary structural support, is highly intelligent, and communicates with the entire body at once, nearly immediately.

In terms of yoga asana, it is important that we turn our gaze to how fascia integrates movement through the major joints in the body. Although, many reliable and intelligent people are proposing particular musculoskeletal actions to maintain space and keep the health of our major joints, unfortunately it isn’t working as well as we may have hoped. Part of alignment is designed to keep space in the joints. However, it is exceedingly difficult, if not impossible, to actually keep space in the joints in an active and moving asana practice by attending primarily to the bones and muscles. Your mind isn’t fast enough. Your body needs to find a way to do this more or less spontaneously based on the experience of life force flow – in the fluids – in the fascial body.

One of the major problems in our thinking has been perceiving the body to be in some way mechanistic. Our joints are not hinges. Even the so called “hinge joints” are not hinges. If we can use our imagination to alter the erroneous preconceptions that we have made about movement we can alter and repair our perceptions rather quickly.

See the continuity of the structural weave of the sea sponge? Imagine a brighter and lighter weave. That is something like the fascia that integrates all the way through the pelvic half, hip joint region, and through the leg. The image next to the seas sponge is endomysium – the fascia within muscle. The third picture shows the moistness and connectivity of alive fascia.

The concept of flexibility definitely comes into play here. Perhaps our definition of flexibility needs to change. Does being flexible mean that by hook or by crook you can put yourself into progressively more challenging yoga posture shapes? Are we perhaps calling something “flexible” that may detrimental to organic prana flow and joint health? Maybe a new definition of flexibility could have more to do with resilience mixed with soft, responsive strength. Maybe flexibility is a unified state of body, mind, and consciousness that fully penetrates every aspect of who you are at all times, making asana practice a celebration of that. Maybe flexibility even involves giving up the desire for more and more range of motion.

Many yoga teachers and serious practitioners have approached this way of thinking about yoga asana, but few have been willing to really give up the ill-advised search for increasing flexibility. Flexibility—as it is commonly perceived—is so far overrated as to be detrimental to our health and vitality. The just right range of motion for your body and your life is important.

Excessive restriction and rigidity is not the answer. Plenty of people need more range of motion in certain areas. But even in those cases, the goal might better be perceived as increasing resilience, suppleness, and responsiveness.  Serious attention needs to be paid to avoiding putting the onus of the releasing of restriction too close to the joint itself. The complex of all the tissues surrounding the hip need to addressed every time. Muscle is important, but muscle is really just a tool of the fascia. We are actually looking for the integration of movement and life force through the whole body. If a movement in and around a single joint, cuts off the connection and flow of life force to the rest of the body, it very likely isn’t helpful. Focusing on “hip opening” for example may be helpful. But it also may do nothing to promote overall integration and in the worst cases—which unfortunately are way too common—it may encourage the very kinds of movement that eventually seriously damage the hip joints.

These are some of the principles that need to be explored when we address our hips in our yoga practice. Joint problems are common obstacles to the flow of forces, but they also became the problem in the first place because movement and the flow of prana were fragmented and out of balance. It really isn’t enough to simply “not go too far” in a yoga posture. How you go matters. Yoga is deep work…and that’s the good news.

In the short video below you will see me demonstrating, with the help of Karen Miscall-Bannon, how organ and bone marrow’s pranic affinity for one another creates an important support for continuity of movement in the hip joint. Maintaining the continuity of movement through any joint helps us to avoid the pitfalls of allowing unhealthy forces to shear through the joint and eventually compromise its structure.

Patty Townsend is the Developer of Embodyoga® and the Embodyoga® In-Depth Study and Teacher Training Programs. She has been training yoga teachers since the early 1980's in Los Angeles, CA. An open mind and a lifetime of serious inquiry and dedication has made Patty an insightful and vibrant teacher with rich gifts to offer to students and teachers of all levels. She writes about yoga and teaches workshops nationally.